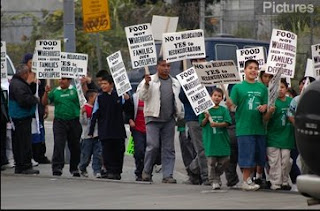 From the ashes of the 1992 L.A. riots, the South Central Farmers have nurtured the nations largest urban farm. They have created a miracle in one of the country's most blighted neighborhoods. Growing their own food. Feeding their families. But now bulldozers are poised to level their 14 acre oasis. THE GARDEN is an unflinching look at the struggle between these Latino farmers and the City of Los Angeles and a powerful developer who want to evict them and build warehouses. Leaving the farmers to ask 'Where is our 'Justice for all'?'
The Garden is nominated for an Academy Award in the Best Documentary Feature category and screens this afternoon at 2.45pm in Wilma 1.
Posted by Truckey at 12:59 PM