Why This Festival Rocks

There's something about opening night at Big Sky that gets me. Directors, editors, and producers are in town (we picked up 17 from the airport yesterday alone), the town is aflutter with film buzz, and the energy level all around is high, as each of the 200+ people involved with the fest have hit the ground running in preparation for 10 days of film, hard work and invaluable experiences. The intimacy of this festival, in addition to its glorious location in downtown Missoula, and the accessibility of the visiting filmmakers creates a vibe that's hard to find at any other film festival, albeit a documentary film festival.

The festival kicked off Friday night with a free screening of HOW TO DIE IN OREGON, sponsored by HBO Documentary Films. Festival Director Mike Steinberg noted that it's an incredible honor to have a free screening the first night of the film, especially in association with HBO, whose quality programming continues to inspire and awe audiences. "HBO makes it possible for us to start our event with a lot of energy. It's really a wonderful gift to this community." 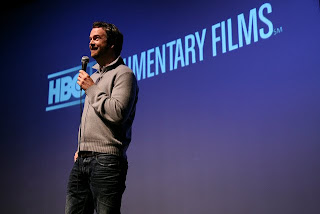 Peter D Richardson, director of the film conducted a Q&A with the 800+ people who turned out Friday night at opening night of the fest. Editor Greg Snider was also in attendance. HOW TO DIE IN OREGON was recently chosen by Sundance as the winner of the Grand Jury Prize in documentary. And judging by the 800+ people who showed for this film at the Wilma, his success is surely not 0ver.

More pictures of the Opening Night at Big Sky Documentary Film Festival
Posted by Truckey at 10:26 AM

Labels: draws a crowd of 800+, Peter D. Richardson gets applause at opening night of Big Sky