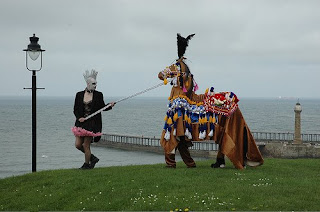 What first struck me about Jeanie Finlay was her shoes: ankle-cut healed lace-ups. She wore them with tights and a long skirt and a flowing top. She had just arrived from England to present her newest film, Goth Cruise, to the audience at the Webster Film Series in St. Louis. Jeanie was engaging and articulate and friendly. And her movie rocked.

Goth Cruise is a film about, well, exactly what you'd think it's about: a cruise inhabited by Goths. Finlay found the subjects for her "Gothumentary" in both the UK and the USA, and follows them on their journey to organize and ultimately enjoy their time on the Caribbean cruise of 150 Goths and 2,500 "norms." The feature length film documents the lifestyles, traditions and outside perceptions of this seemingly controversial group of people, and presents it in a way that's intriguing and informative.

There's the guy whose coworkers have no idea about his after-hours appearance.
The man who dresses in Goth drag.
The woman who never fit in and finds comfort in dressing Goth.
The couple who brings their child along on the cruise.

Finlay shows them packing everything from their sunscreen to their head dresses to their horns, then captures the reaction of the other attendees ("norms") as they board the ship, party, and take advantage of all the amenities cruise ships offer--like shuffleboard and buffets. The contrasts presented are striking, and the impressions of the elderly on-lookers is, at times, heartbreaking; but, overall, the film realistically explores the side of everyday people whose penchant for piercings, darkness, leather and make-up ultimately has an effect on the attention (negative or positive) they receive from those different than themselves.

The pace, the soundtrack, the intimacy of the interviews, the colorful portraits and the extraordinary cinematography (Finlay is also a photographer) make this film one of the must-sees at Big Sky this year.

Finlay's previous film, Teenland, looks at the life of 4 teenagers in their bedrooms. It aired on the BBC two years ago. Above photo from Finlay's Flickr site documenting the cruise.
Posted by Truckey at 2:11 PM