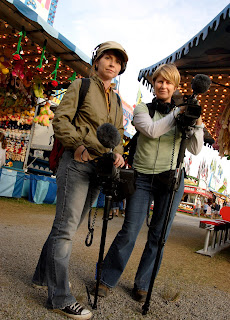 I talk with photographer Virginia Lee Hunter about carnivals, train hopping and her inspirations.

Hunter assisted Alison Murray with her film, Carny, which screens at 11.15am on Monday, February 16th in Wilma 1.
________
T: Tell me a little about your involvement in the film. How did you meet Alison Murray?
VLH: I met Alison at a hobo convention in Britt Iowa in 1999. She was making her first doc called ‘Train on the Brain’ about riding freight trains across Canada. At the time we met, I too was riding freight trains but my main photographic focus was working on a personal photo project documenting the pop culture of carnivals as Americana and the subculture of carnival workers. I had often felt this project would be a good documentary film but I had no experience in telling a moving picture story. I admired the way she handled her subjects with great empathy and wit in ‘Train on the Brain’ and thought one day we might be able to team up and turn my project into a documentary.
T: In what capacity were your photos helpful for the making of her film?

VLH: Alison and I kept in touch and in 2005 I asked her if she’d like to make a documentary with me based off the work I had been doing on my carnival project. Although we had never collaborated before, we were willing to see if we could make this happen and throw caution to the wind, so to speak. We each brought elements to the film that the other was lacking--her creativity in crafting compelling story lines as a film and my in roads to this elusive sub culture that is traditionally sensitive towards any media attention as well as my visual aesthetics on a subject I had dedicated several years to...we both gained respect and trust in each’s input and in the end, the film speaks for itself in the richly, compelling stories and vivid visual capturing of the carnival.
During that time we were working on the film I had my photographs published in a book titled, ‘Carny; Americana on the Midway,' published by Umbrage Editions which I guess makes this endeavor I began so many years ago complete.

T: What drove you to shoot Carnival people? What is it about carnies that intrigues you?
VLH: I became interested in exploring carnivals as how they relate to modern Americana when I went to a carnival in the early '90s. As I wandered around the midway I saw myself, when I was a teen, marauding throughout the midway with my girlfriends, flirting with the town boys and the carnies, who to us were dark and mysterious outsiders. Those were my distinct memories. As I recognized my own, I thought if I had memories what are others around me and their memories? I began to see others, old, young, couples, with families, laughing, and creating their own memories , as they were repeatedly unfolding over time.
It was my own memory and seeing others’ that inspired me to photograph the carnival as nostalgic homage to Americana. They are America’s gypsies. I wanted to give them a chance to tell their stories as so many tales and impressions, and not all kind, have been told about them. The Carnival Midway then becomes a very unique and bizarre autonomous zone complete with whirling twirling lights and zany cacophony. Very strange and magical.

T: Have you been influenced by Arbus or Meiselas? If so, in what way?
VLH: Perhaps subconsciously, in my earliest years exploring my voice and vision in photography, I was influenced by Arbus. However, it was on the eve of my first trip to photograph carnivals in 1996 that I was introduced to and given Meiselas’ book ‘Carnival Stripper’. Everything she had done in the book; style of shooting, the gritty black and white, even the interviews transcribed, I had envisioned to be my approach to capturing the essence of carny life. I was both disheartened and inspired. Disheartened because it had been done before me, and inspired because I knew I was on then, the right path as I related to that book. I since added color imagery to define the pop culture of the carnival midway so the end body of work is not mimicking Meiselas’ ‘Carnival Strippers’, but certainly, I was inspired.

T: Where do you shoot mostly? In what cities? Do you follow one circus in particular?
VLH: I’m most interested in the rural areas the carnivals travel through as it seems the carnival plays a more significant role in rural American entertainment and celebration. When Alison and I made CARNY, we settled on one show out of North Carolina that traveled up into New York State and back down again into North Carolina. We needed to stay with the stories of our subjects and the show they were traveling with, but in my approach for the book I was going for a broader swath to portray the carnival life as ‘Americana’. In my own project, I traveled across the western states, Appalachia and into upstate New York.
Posted by Truckey at 12:43 PM