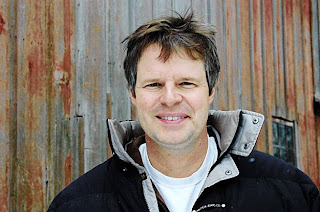 Documentary filmmaker Doug Pray has made movies about surfers, truck drivers, graffiti artists, hip hop DJ's, grunge rockers and advertising gurus. But while his maverick subjects vary in profession, Pray says they all play roles as "fiercely independent individuals" in search of the certain rush that comes with defying the status quo.
"They're all celebrating what is meaningful," he says, "but they're working in different ways.
To continue Big Sky's annual tradition of showcasing a collection of work by a distinguished documentary filmmaker, Pray's retrospective kicks off today with his most recent work, Art & Copy. The 2009 film deals with the creative minds behind some of the most famous advertising campaigns ever. Lee Clow of Apple, Dan Wieden of Nike and George Lois of Tommy Hilfiger, among others, discuss their work and how they approached the task of successfully selling a product to an entire society.

What this film ISN'T, says Pray, is a look at the 98% of what he calls bad, manipulative mediocre and demeaning advertising that exists today. Nor is it a social critique or an attack on advertising companies. What it IS, however, is a "celebration of that rare 2% of really good advertising that can actually inspire people."
The dozen or so artists interviewed in the film were all given one arduous task: to create a reason for people to buy a certain product. This movie explores their passions, methodologies and reasons behind working like they did. The question here is: "When you are given a job, how can you do it in a way that's better and more interesting?"
"Advertising isn't going away," says Pray. So why not do it well?
The subjects of Pray's work may at first glance seem divergent. But through his observant lens, the films explore the known (and unknown) boundaries of their respective subcultures and feature the top tier of practitioners with the group, those that have stepped fully into the fold and aren't afraid to look back.
These inspiring portraits of artists, revealed in films like Hype! (about the grunge scene in Seattle in the late 80's, early 90's), Scratch (about Hip-Hop Dj's), Veer (about 6 Londonites), Feel Your Heart Race (about NASCAR nation), Surfwise (about a family of surfers), Big Rig (a look at America through the eyes of truck drivers), Infamy (a look at graffiti artists) and Art & Copy, will all be screened starting today at the Wilma. SCHEDULE HERE.
Posted by Truckey at 12:20 PM

Hello I am doing a study for my documentary class on your Film Festival
Each student of 17 students do a study on a Festival, then we traid information to encourage students to enter Festivals suitable to their favoured genres etc.

We are told to contact the film Festival Directly for part of the information. I go to UNCW, Im an exchange student from Australia

Could you help me by responding to the top 5 questions in particular and the BACK TO BASICS COUPLE?
And any help you can give me toward the others will be Greatly appreciated!!

My assignment is due the Monday 29th of March coming.


1. BASED ON THE PAST 3 YRS WHAT TYPE OF FILMS GET PROGRAMMED? (e.g. Shorts, features, political, global, local, gender, sexuality, race, themes?)

2. From this information what are the ODDS OF ACCEPTANCE?

3.HOW MANY ENTRIES DID THEY GET THIS YEAR?

4.HOW MANY ENTRIES DID THEY GET LAST YEAR?

5. HOW MANY ENTRIES ARE/WERE DOCUMENTARY SHORTS?

BACK TO BASICS:
Who made it happen & who runs it now?
What’s the mission?


Also in addition if you can help...

Where is it? When is it? And when is the deadline for entrees?
WHAT DO YOU DO TO ENTER?
WHO’S ELIGIBLE, IS THERE A STUDENT CATEGORY?
WHAT ARE THE GUIDELINES?
HOW MUCH DOES IT COST TO ENTER? Early, Regular, Late, Student –
ARE THERE PRIZES?


Thanks heaps for your time =)
Peace out


P.s. if you can be of no help is there someone you could recommend?