The Mormons Cut It Out in Cleanflix 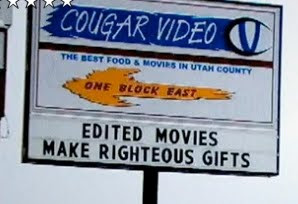 Cleanflix is a documentary about the phenomenon started by the Mormons in Utah who edit violence, sex and profanity from certain films so they are "clean" enough for their people to watch. Is this sanitization process acceptable? What about the artists whose films are being censored?

Josh Ligairi of Cleanflix, screening as a U.S. Premiere Tuesday night at 7.45pm, talks with Big Sky Film Fest about his connections to the Mormon culture, his struggle with objectivity and the relationships he fostered with his subjects.

BS: How did you hear about this subject matter of censored videos?

JL: We both lived in Utah when we decided to make the film, and edited movies were kind of in their hayday. You couldn't miss them. Andrew had a lot of experiences with them in college; his roommates watched them all the time. I think seeing Steven Soderbergh's Traffic edited, which is one of his favorite films, was a pretty traumatic experience. I had never actually seen one before we started the film, but it was a subject that interested me a great deal. For me, the most interesting aspect when we began was the notion of self-censorship.

BS: Are you Mormon? Did you grow up around Mormons?

JL: We both grew up Mormon, but not in Utah. We both moved around a lot growing up, Andrew in places like Georgia and Michigan, me in places like California and Idaho. We both eventually made it to Utah.

BS: What drove you to make a film about this topic? Was there a personal connection?

JL: Neither of us were supporters of edited movies. We both had Mormon heritage and we were both filmmakers (not to mention huge cinephiles), so all of that played into it. However, I'm not sure either of us felt any specific personal connection. For me, I just saw a story and it was a story that I knew I could tell. Still, I do think our experience with Mormon culture was a huge help when making the film.

First, we understood the mindset of the people who were editing the movies, even though we didn't necessarily agree with their point of view. I think it would be really easy to paint this issue black and white, but I feel like being able to empathize with the culture made for a much stronger, much more nuanced film. For some people that is a problem with the film. They want to feel superior to these people whose actions they disagree with. We didn't want it to be that simple.

The other advantage is that we had access. I think these guys would have been a lot more suspicious of outsiders than they were of us. That familiarity with the culture gave us a lot of freedom and opened up a lot of doors that a complete outsider could have never opened.

BS: Why do you feel this topic is an important one to show the public?

JL: There are so may issues at play here. First, again, it is just an interesting story. It is entertaining. It is real human drama. If you wrote it, nobody would believe it.

Second, the film deals with questions for which there are no easy answers. Should corporations be able to tell us how to use their products if we have purchased them? Is it different if those products are also art? What if censorship comes into play? These are really grey areas that I struggled with for three years while we made the movie and I want the audience to struggle with them, too, because they are not going away once our film is over. As we become immersed in the digital age, people are going to be re-mixing and re-mashing their media in ways that we haven't yet imagined. How will artists respond? How will copyright holders respond? Cleanflix could be seen as a little test case of things to come.

BS: Where is most of the film shot?

JL: Well, 90% of the film was shot in Utah Valley, commonly known as "Happy Valley." We also went to California, Idaho, New York, and Washington DC during our journey, but we kept coming back to Utah. There were edited movies in other places, and there are certainly similar attitudes in other places, but, as I've said a lot when talking about the film, we focused on Mormons in Utah because it took that culture to create edited movies.


BS: What do the subjects think of your film? Have they seen it?

JL: Unfortunately, we haven't yet been able to show the film to many of our subjects. We have contacted Daniel Thompson, who kind of emerges as the main character in the second half of the film about showing it to him. Hopefully that will happen this week. Ray Lines and Allan Erb, the main guys behind CleanFlicks, don't watch R-rated movies, so we plan on getting them a toned-down version as soon as we have time to create it.

BS: Do you feel as if you shot the film objectively?

JL: When telling a story there is no such thing as complete objectivity, but we really made an honest effort to tell it like it was. Which was hard because you start to form relationships with your subjects when you spend two years filming them, you become friends and you feel bad including footage that you know may hurt them, but we always approached Cleanflix with strict journalistic integrity, and I hope they will all appreciate that as much as Robert did.


BS: Did many of your subjects comply immediately or did they resist your interviews?

JL: It was really hard to get some of these interviews and even harder to find out the truth behind what they were telling us. A lot of these guys were operating illegally and we were trying to figure out how the whole operation worked. Sometimes I am a little sad that we present the information so matter-of-factly because, until the film came out, we were literally the only people that knew most of this stuff. In the end, we made the choice to keep ourselves out of the film, and I am glad that we did.

JL: I love being transported to a part of the world that I have never been to. And I mostly appreciate a filmmaker who is willing to stay back behind the camera and let the subjects speak for themselves. Cleanflix shines a light on a very specific segment of the culture and I think there is a lot to be gleaned from that. The more specific it is, the more universal it becomes.

You can find more information and view the Cleanflix teaser trailer at cleanflixthemovie.com

I don't think he was "struggling with objectivity," as the intro suggests, so much as he was "committed to objectivity," but maybe that is splitting hairs. Great write up and interview. Wish I could be there!