Wednesday Night Brings the Portrait of a Private Artist to Life

In DAVE BAILEY: FOUR BEAT TO THE BAR AND NO CHEATING, director Jérôme de Missolz has created an engaging portrait of a very private man who bared the soul of the swinging sixties and seventies with his photographs and films. Portraits of people like these are always fascinating, captivating and alluring, and this film is sure to be one of them. 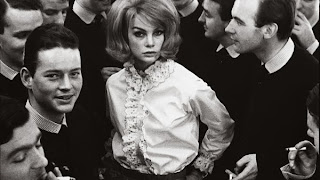 uses (Jean Shrimpton, Catherine Deneuve, Marie Helvin) and captures the spirit and elegance of his times with his refreshingly simple approach and razor-sharp eye.

He is also the man whose life and work inspired one of the cult movies of the sixties, Michelangelo Antonioni’s Blow-Up, and who has constantly travelled the globe either with the most beautiful models or chronicling the contemporary reality of Papua New Guinea, Brazil, Vietnam, Afghanistan and other countries with ground-breaking reportages. Above all, Bailey is a romantic with a delightful sense of humour approaching his 73rd year and showing no sign of slowing up.

WEDNESDAY AT 7PM AT THE PIPESTONE AT 129 W FRONT STREET
Posted by Truckey at 3:16 PM