Today starts with a FREE screening of BAG IT at 12.30, with the director in attendance for a Q&A.
In this lively and comical look at one of the most important environmental issues of the day, Telluride, CO everyman Jeb Berrier makes a resolution to stop using plastic bags at the grocery store. Little does Berrier know that this simple decision will change his life completely. He concludes that our consumptive use of plastic has finally caught up to us, and looks at what we can do about it. 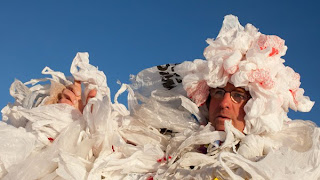 __________
Wednesday night's Shorts Program: Darkness and Light is composed of eight fabulous films, dealing with everything from life and illness to sleep deprivation and death. But six of these films have one thing in common: they were all made by students from the same MFA program at Stanford.

We talked to Jenni Nelson, Mina T. Son, Theo Rigby and Sara Newens who were here over the weekend watching films, eating milkshakes, meeting fellow filmmakers and telling us about the selective school which accepts only eight students a year for the rigorous two-year program in Documentary Film and Video.
When asked why they could only stay for the weekend and not take a day off, they responded, "These were our days off."

Mina (of TOPSPIN and THE FINAL CHAPTER) is in her second to last quarter in the two-year Documentary Film and Video program and is working on her final film--one of four (one being in 16mm b&w) all graduates are required to make in their two years as students. She raves about the program, despite its intensity.

"We are all making and will make films; that is what they're training us for."

The concentrations among the students vary, as some will go on to do commercial work while others stick to the artistic, more independent track. But they all get a lesson in the art of film festival strategy, which has proven successful, seeing as this year's programming has films from Stanford students of both present and past.

Shorts Program: Darkness and Light will show Wednesday night at 9.45pm in Wilma 1. NIGHT AWAKE, THE COMFORT OF COLD, THE FINAL CHAPTER, FIRELINE, INDELIBLE MARK, MICHAEL & HIS DRAGON are all Stanford student-made films.
Posted by Truckey at 11:03 AM