Yo La Tengo and Underwater Urchins at the Wilma

I first saw Yo La Tengo (I've got it!) play THE SOUNDS OF SCIENCE 4 or 5 years ago in St. Louis at Webster University. I was unfamiliar with the band, only hearing about them at the local record shop and from my sister whose obsession was on the verge of, well, obsessive. I loved what I heard here and there, but it wasn't until this show that I was truly turned onto their unique and complex sound.

They played two shows that night, each one sold out, and I remember being squished in like a sardine looking up at a movie screen undulating with vivid images of starfish, seahorses, urchins and octopi while the trio played solidly below. I eventually fell asleep, being drawn into a sort of trance--the sheer volume and intensity of the music was just enough to lull me into a dream state. 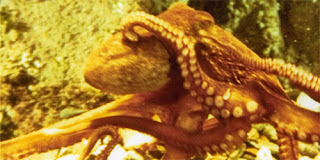 A few years later I was asked to teach a middle school Oceanography class. Seeing as I knew next to nothing about Oceanography, I turned to the DVD of THE SOUNDS OF SCIENCE to help introduce the kids to the underwater world as well as some kick-ass tunes. They enjoyed the shrimp and jellyfish, sure, but the audio stimulation was what really stuck with them, as it did me.
Click on the Octopus for a sample of their tune.

Yo La Tengo plays TONIGHT (Tuesday) at 8pm at the Wilma.

There are still tickets available!!!!!!!!!!!!!!!!!!!!!!!
BOX OFFICE AT THE WILMA OPEN AT NOON. $20 each, yo.
TICKETS
__________________
New Jersey’s legendary independent rock trio Yo La Tengo (Georgia Hubley, Ira Kaplan, and James McNew) bring a live performance of their ambient and altogether mesmerizing score for the rarely seen undersea documentary shorts by influential French avant-garde filmmaker Jean Painlevé. One of the first to plunge underwater with a movie camera, Painlevé’s films are hypnotic and surreal, capturing the strange beauty of the scientific world as surely as Bunuel and Man Ray. His evocative images are taken to a new level of dreaminess by Yo La Tengo’s free- form compositions.

Sponsored by KBGA, The Montana Arts Council, First Security Bank and Northwest Energy
Posted by Truckey at 8:59 AM