Get Your Alloys Right!

Roger Ebert has called the Alloy Orchestra "the best in the world" at what they do, and, after their musical accompaniment the 1919 silent film, South, those in the audience tonight might feel the same way. 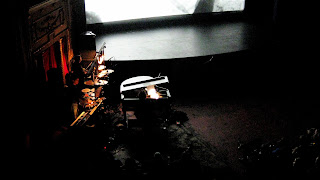 The Boston-based Alloy Orchestra has been around since 1991 when Ken Winokur and Terry Donahue united their unique percussion backgrounds with a pianist who was later replaced by the current pianist, a trained compositionist and a former punk rocker, Roger Miller, nearly 11 years ago. Their premiere film was the Fritz Lang classic Metropolis. (The man who asked them to provide the score apparently didn't like the 1980's Freddy Mercury version.) The ensemble insists on using only the best prints available, and has travelled as far as New Zealand and Sweden to play their compositions made for both short and feature-length silent films.

One of the most intriguing aspects of the band is the "rack of junk" that travels with the trio to every gig. Depending on the airport stipulations, however, the number of instruments may vary.

The rack of junk may include any or all of the following:
2 or 3 gongs
4 horseshoes
2 truck springs
random bells
metal pipes used as chimes
a metal bedpan
a real drumset torn apart and spread out
cakepans used as untuned steel drums
Pots
pans
cowbells
a giant xylophone made of 2x4's

Terry Donahue, a percussionist, has also picked up the accordion and the musical saw, or what he calls the "poorman's theramine," a rare instrument typically used in the early 1900's. He uses the saw because "has a lot of traits that work much better for us. It is much more durable to travel with and lends itself to the junk thing very well."

"We anticipate we'll be together for a long time, so it's been worth our learning instruments and learning styles of music that we can bring into the band," says Ken Winokur, the second percussionist.
He picked up the clarinet 8-10 years ago because he felt the group needed more melodic instruments.
"I figured it was warm and pretty instead of the harsh metal stuff."

Roger uses sheet music, but leaves room for improvisation, while Terry tries to memorize as much as possible, but phases it out as quickly as he can. Kerry composes a kind of "comp

lex storyboard." For him, it's all about reading ahead and anticipating which sticks he needs for which drum or cymbal at which time.

While the musical compositions aren't too difficult to sort out, Winokur explains that choosing films is not as easy as it looks, and that being "commissioned" is usually not an option.

Donahue agrees.
"So that's the trick: finding a film that we wanna play and that people want to see that can be accessible. Some festivals want the really obscure ones."

"When we were asked to do it [Metropolis], we did it the way we thought it should be done," says Donahue. "We didn't look back at the old scores and think of it as something old...we still try to think of these things that work as pieces of art that will stand the test of time. We just try to play music we think is appropriate to the film."

One the trio's toughest challenges is their likelihood as a percussion-based band to overwhelm the score with drums and too much noise even when the scene is soft and quiet.

"The best example of that is Blackmail (Hitchcock, 1929)," adds Donahue. "We want to be drummers and we want to hit'em and Blackmail is so...suspenseful. It's one of the hardest ones just for that reason, because everytime you wanna play something, you gotta pull back and say no, i only have to play a quarter of what I want to play."

"But on the other hand I think that adds to what makes the score really work for it. Because our feeling of tension of pulling back translates into a feeling of suspense which is perfect for a Hitchcock movie. Mostly we try to find the feel and vibe and the rhythm of the movie, try not to overplay it then go from there. Sometimes it's easier said than done."

Audiences ("little kids, hipsters and grandparents") continue to be moved by their compositions and follow their work around the world. Their next project, Man with a Movie Camera, will premiere in St. Petersburg, Russia in April.
Posted by Truckey at 2:39 PM