Whatever It Takes at Big Sky 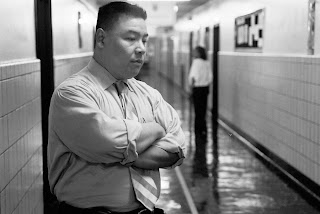 When Chris Wong's friend, Edward Tom, decided to become an educator after working for years at Saks Fifth Avenue, Wong knew he had to tell his story.
Whatever It Takes chronicles Tom's first year as principal at a high school in the Bronx while focusing almost primarily on his interaction with Sharifea Baskerville, a struggling ninth-grader.
While the film's subjects are an African American student and an Asian American (two races that are not typically known to get along in the inner-city environment), Wong says the film "isn't about racial conflict, because that issue really doesn't pop up, but I think that's definitely an interesting aspect....seeing them work hand-in-hand is pretty revolutionary."
Wong says the first two or three weeks of filming was difficult because the students wanted to be on screen all the time, but "once they realized they weren't going to be on the news or MTV, they sorta relaxed."
"I think it's pretty evident from the film that no one notices the camera...that they aren't acting for the camera."
Editor Zeb Smith agrees.
"That's one of the benefits to a long-term project, when you spend a year on the story, they get used to you being around. I also think in that kind of community, there's a sense of adaptation to their surroundings."
"It also takes a special person to adjust to the camera," adds Wong. "They're kind of raw...they say and do what they want without thinking. I think that's always the kind of character you want for a documentary film. We got lucky."
Any why did they decide to sneak preview it here?
"We chose to bring Whatever It Takes to Big Sky because had heard a lot of good things about the festival," says Wong. "It seems to have a good reputation and we love being in a place which focuses purely on documentaries, that way we don't get lost."
Whatever it Takes screens today at 1.30pm.
Next stop is the World Premiere at the Asian American Film Festival in San Francisco. And Wong's current project about game shows and its fandom (Wheel of Jeopardy) is due out within the next couple years.
Posted by Truckey at 12:22 PM