Joe Berlinger and his Q&A's at Big Sky 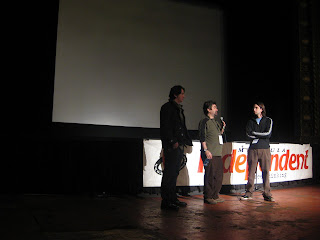 At 12.3o today Big Sky will present another one of Berlinger's great films, Gray Matter, a contemporary story that illuminates one of history's darkest periods. It's a compelling tale of murder, conspiracy, guilt and redemption. It accounts Berlinger's hunt for 89-year-old Dr. Heinrich Gross, one of Austria's leading forensic psychiatrists and alleged murderer of hundreds of handicapped children. A Q&A will follow the film.

At 2.30 plays Metallica: Some Kind of Monster, an in-depth portrait of the most successful heavy metal band of all time, as they faced monumental personal and professional challenges while recording their first studio album of original songs in five years. The film trades rock-star posing for truthful introspection, and reveals an intimate portrait of the individuals behind a legendary band and their unique creative journey. A Q&A will follow the film.
Posted by Truckey at 11:03 AM