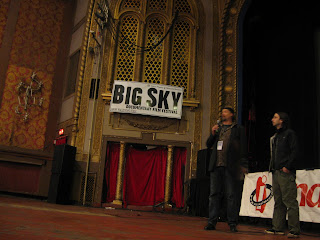 Harrod Blank created a film called Wild Wheels back in the day, but has now come out with something even more wild: Automorphosis!

It's a straightforward piece about people and their art cars--nothing more, nothing less. What drives people to decorate their cars? Is it ego? Insecurity? Obsession? After 13 years, Blank (son of filmmaker Les Blank), may have figured it all out.
The film played Wednesday night to a very inquisitive crowd whose favorite car was this one.

At the discussion panel today, Blank spoke about the business of documentary filmmaking and how his passion outweighs his desire to make money. While he's reluctant to go the online digital route ("highway robbery") of screening his work, he understands that by selling to Netflix or to Amazon, you can reach a different audience you might not reach if you tour the festival circuit. Blank is about getting his film seen--not about "selling out."
Check out Blank's cool site here. He's currently working working on a film about The Burning Man Festival (shot on 16mm) due out in the Fall of 2010.
Posted by Truckey at 12:09 PM