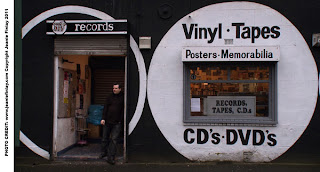 John Fullman really likes vinyl. He’s been collecting records since he was 10 years old, and 14 years ago when he opened Ear Candy Music on South Higgins, his favorite hobby became his full-time job. Specializing in both CDs and vinyl, Ear Candy Music is a haven for local enthusiasts who still care about the physical aspects of music collecting that digital mediums have largely displaced. The artwork, the packaging and presentation, and the superior sound quality are the usual values of vinyl-heads, but “there’s also the whole aspect of ‘digging,’” Fullman says. “The hunt for that elusive title, the record that sometimes takes years and years to find.” The idea that a song might take more than a few minutes of Googling to track down may be disconcerting to some, but in a record store like Ear Candy Music, we’re reminded that our favorite albums are more than lumps of data ready for consumption—they’re unique human artifacts.

It makes sense, then, that Ear Candy Music is sponsoring this year’s screening of Jeanie Finlay’s Sound it Out, a portrait of the last surviving record store in her hometown of Teesside, England. The film, screening Sunday. Feb. 19 at the Wilma, is Finlay’s fourth entry in the Big Sky Documentary Film Festival. Her 2007 entry, Teenland, was Finlay’s debut screening in a festival setting. “They’ve always supported my work as a filmmaker,” she says. “I like the intimacy of this festival—I met Mike on my lift from the airport on my very first year, and we’ve been friends ever since.”

Sound it Out screens at the Wilma Theatre on Sunday, February 19th, at 5:15 PM. More information is available at http://www.sounditoutdoc.com. And remember to support your local record store, Ear Candy Music!