We Go Together Like… Grunge Music and Ice Cream? 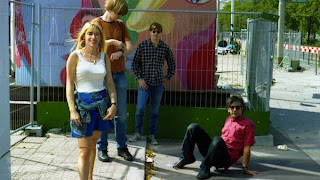 David Markey’s tour documentary 1991: The Year Punk Broke depicts legends of punk and grunge—including Sonic Youth, Nirvana, and the Ramones—at a delicate moment. Sonic Youth had just signed to a major label and were about to reach a national audience after ten years of underground buzz. Nirvana were unknowns on the verge of superstardom, when they would render the term “alternative” music meaningless. In its one hundred grainy, goofy minutes, 1991unwittingly heralded the arrival of grunge in the American mainstream.

Enter: ice cream. Going into their seventeenth year, it’s safe to say that the Big Dipper is a Missoula institution, the prime destination for gourmet frozen treats. But Charlie Beaton started the Big Dipper during the height of the nineties’ alternative-music mania, and they still retain some of the do-it-yourself spirit of that age. I spoke with Beaton about the Big Dipper’s choice to sponsor 1991 at the BSDFF and his not-so-secret punk rock roots.

Charlie Beaton: Well, I went to the movie [1991: The Year Punk Broke] at the Crystal Theatre when it came out. I was playing in a band called The Banned and I played in BTO—we actually just started playing again. So from the late eighties all the way through the nineties I was playing in bands and booking shows in Missoula. That’s sort of my era for college is the early nineties. There was a lot of great music at the time, and I went to all those shows—I saw Nirvana play and the Ramones. All those bands who are in the movie, I've seen.

BSDFF: You started The Big Dipper in 1995, the same year that Sonic Youth headlined Lollapalooza. Do you think there’s a connection between your punk background and your ice cream ventures?

CB: Having been in a punk band and setting up concerts, which was all DIY, part of opening Big Dipper was an extension of that—it's an artistic thing, it's creative. We didn't have a lot of money, so we gave away stickers, we gave out fliers. I ran the business the same way I promoted my band.

BSDFF: What inspired you to sponsor this film in particular?

CB: I love documentaries and I love music documentaries particularly, so when we got the opportunity to choose a film to sponsor, this one seemed perfect. And I thought it was cool that I had seen it when it came out. I bet you get a lot of the same people who saw it at the Crystal back then to come and see it. It’s been out of print so a lot of people haven't been able to see it since then.

BSDFF: What exciting things are coming up for the Big Dipper?

CB: We’re working with Posh Chocolat on caramel sauces and syrups. We’ve got some cool landscaping projects that people are going to like in the seating area. Also we help sponsor Total Fest, which is in August this year, and we always have live bands play. I'm pretty excited about that.

David Markey’s 1991: The Year Punk Broke is playing Sunday, February 19 at 9:15 at the Wilma, with live music by The Skurfs following the film.