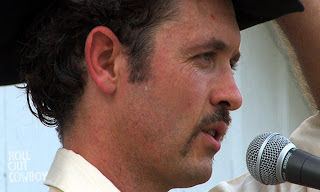 Back by popular demand, Roll Out Cowboy, Elizabeth Lawrence's wildly successful feature-length documentary about rapping cowboy Chris “Sandman” Sand, will screen for its second year in a row this Saturday afternoon, Feb. 18, at the Crystal Theater. Nominated for last year's Big Sky Award, Roll Out Cowboy went on to take countless prizes and Jury Selections, including Best Documentary at the Seattle True Independent Film Festival, Flint Film Festival, and Arizona Underground Film Festival. The movie crossed Europe in screenings last year and is now back to Western Montana to entertain Big Sky audiences.

Chris Sand made his start performing at open mic nights in Missoula’s very own Top Hat and The Rhino in the early 1990s. He went on to release ten full-length CDs of his solo music and collaborations. Lawrence’s documentary follows Mr. Sand’s traveling musical antics from North Dakota to Washington and back again in the 2000s. Described as Woody Guthrie meets L.L. Cool J, Mr. Sand’s performance style is both hysterical and sincere.

The Sandman credits the making of Roll Out Cowboy with helping him move onto a new chapter in this life. For example, Chris met his wife, Hanna, on set the last day of filming. These two have recently welcomed their first baby girl and relocated the whole family to Missoula’s lower rattlesnake neighborhood full-time. After suffering a vocal chord injury this past year, The Sandman is taking time out from touring to recuperate and be with his family. Asked how he feels about Roll Out Cowboy’s encore appearance at the Big Sky Documentary Film Festival, the Sandman says, “it’s extremely thrilling, a big honor.” The film’s screening will be followed by a special musical performance by the Sandman himself! Keep your eyes peeled for a cowboy rapping around Missoula, and also for the Roll Out Cowboy DVD release in the near future. For more information, visit the Sandman’s blog at http://www.chrissand.net/.