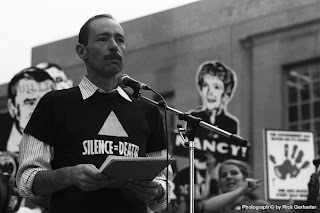 For the past 25 years, the mission of Open Aid Alliance has been to prevent the transmission of HIV while advocating for and supporting individuals currently living with HIV/AIDS. This year, OAA is sponsoring the film Vito, a film by Jeffrey Schwartz about Vito Russo, gay activist and critic of LGBT representation in the media.

BSDFF: Can you give our readers a summary of what the film, Vito, is about?

OPEN AID ALLIANCE: The film documents the valiant life of Vito Russo, an activist for the LGBT movement and later, he fought for recognition of the AIDS epidemic and acknowledgment from then President, Ronald Reagan.

BSDFF: How did you first hear about the film, and why did this particular film interest Open Aid Alliance?

OAA: The BSDFF approached us about Vito and we thought it was a great way to support the festival and help bring a great film to Missoula. When I think about Vito’s work with ACT UP, the gorilla activist group, and the way they fought for access to AZT and other early AIDS drugs I’m definitely inspired and thankful for people like him.

BSDFF: What are some of the ways Open Aid Alliance continues to promote awareness and prevention of aids, while supporting individuals currently living with HIV/Aids?

OAA: Keeping HIV/AIDS in view is one of our most important goals; maybe it’s a result of the media, but for some reason (HIV/AIDS) seems like forgotten news to a lot of people. It’s too easy to assume that everybody knows everything there is to know about HIV at this point. 50,000 people are newly infected with HIV each year in the United States; this clearly demonstrates the continued need for ongoing prevention and outreach. Open Aid Alliance focuses efforts on our testing program; it’s the only way to know whether you have the virus or not. We can’t make someone be safe, but we can help them be safer.

BSDFF: If—and why—do you think Missoula is a unique place to host a film festival like this, and how do you see this benefiting the local community?

OAA: I think the film festival is an incredible asset to Missoula. We’re so lucky to host an event like this. It’s important because we can become isolated; the film festival brings new people, new ideas and new worlds to us on the screen.

BSDFF: When viewers leave the theater after watching “Vito,” what are ways we can become active with AIDS awareness and support in the Missoula community?

There are so many things I could suggest. Here are a few I think could be most important: We need the community’s support. Federal dollars for HIV prevention are being redirected to areas of high incidence. In a sparsely populated state like Montana the impact is huge. Our funding for youth education and women’s groups has been cut completely. We’re committed to free testing for everyone, but our funding for those tests has been cut. Participate in our events, host a pantry drive and collect toilet paper and household cleaning supplies for our clients, volunteer and help us be more visible in the community and join our Board of Directors. In more general terms, realize that HIV is in Montana and in Missoula. Realize that you may know someone living with HIV but you don’t know it yet.