We Are All Poets 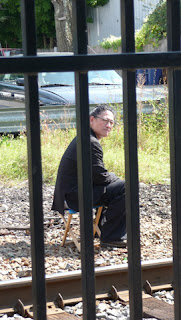 Mark Gibbons is many things: the author of six books of poetry, an editor, a teacher, a life-long Montanan, and now, in conjunction with the Jeanette Rankin Peace Center, a sponsor helping to bring Katja Esson’s Poetry of Resilience to the Big Sky Documentary Film Festival.

Poetry of Resilience is a document of survival, told through the words of poets who have endured genocide, revolution, and the most terrifying facets of war. After the screening, Mark will read along with other noted Montana poets including Sheryl Noethe (the state poet laureate) and Casey Charles. Betsy Mulligan-Dague, Executive Director of the Center, will introduce the film and join the poets in a question-and-answer session.

A conversation with Mark is a poem in itself, and his wisdom on poetry is perhaps best summed up by a quote that I spotted on his LinkedIn profile: “We are all poets, but most of us don’t write.”

On his philosophy of poetry:

GIBBONS: I arrived at that - I used to say that about my dad. He was a poet and he never wrote... when I teach, out of each kid, even if they don’t write at all, you will get at least one good poem. A poet is someone who expresses emotional life in language, and we all do that. People have survived using the written word throughout history - that’s where some of our best literature comes from.... The local poets who are reading, maybe they haven’t survived the Holocaust, but they’ve survived something. The fact is that all poets who have who have ever put pen to paper have at some point written their way through something - we’ve all survived. We learn to survive by talking.

On Poetry of Resilience itself:

GIBBONS: I think it’s an incredible film - I watch a lot of film, and I love the way that the director places language on the screen. The use of Li-Young Lee to narrate, illustrate, and bookend the whole thing, he’s more like us, an outsider, and he’s also a hell of a poet. I look forward to seeing how people respond to it.

Poetry of Resilience will be shown on Sunday, February 19th at 7:00 pm at the Crystal, along with Language of the Unheard.