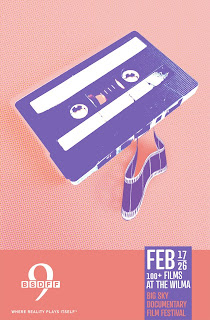 The judges of the 9th annual Big Sky Documentary Film Festival have announced this year's award winning films in the four competitive categories: Best Feature, Big Sky Award, Best Short Film and Best Mini Doc (under 15 minutes). The awards were announced Thursday evening at a ceremony at The Loft in downtown Missoula. Each category winner will receive $500, courtesy of The Documentary Channel.

At a reception sponsored by the Documentary Channel, the jury announced the following awards:

The Best Feature prize was awarded to Jeff Orlowski of CHASING ICE, about National Geographic environmental photographer James Balog. Jurors Amy Shattsky and Ben Fowlie called the film an extremely timely and important documentary about one man's journey to demonstrate global warming in action by photographing the recession of the glaciers. Touching, terrifying and informative, we feel the highs, lows, frustrations and joys of the ultimate success of his experiment. Through a patient and thoughtful filmmaking approach, the director vividly captures the power and awe of the glaciers falling apart. As they recede into the ocean, the glaciers cry out, warning us of the peril that our planet is in.

All awarded films will re-screen the final weekend of the festival. The Awards Screenings will take place in the Wilma Theatre, February 25 & 26. The schedule for this weekend's screenings is as follows:

A special encore presentation of MARINA ABRAMOVIC THE ARTIST IS PRESENT

Thanks to the overwhelming response from audiences, Big Sky will rescreen some of the most popular films at the festival in several screening blocks set aside on Sunday, February 26 at the Crystal Theater and The Wilma. The films selected to rescreen, determined by attendance and general buzz, are as follows:

In the final weekend of the festival, All Screen Passes will be available at a discounted price of $75. Passes may be purchased at the Wilma box office.

For more information about the festival or to see a full schedule, visit www.bigskyfilmfest.org.