Old traditions can be as pleasurable as a well-groomed trail. New experiences can be as exciting as fresh powder. Bob Ward and Sons Sporting Goods, by sponsoring Constantine Papanicolaou’s Ordinary Skier at this year’s Big Sky Documentary Film Festival, is bringing winter sport aficionados a bit of both. 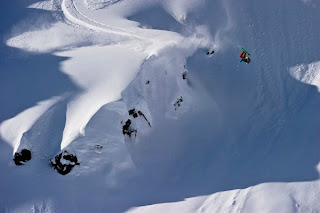 Bob Wards has been a local fixture for 95 years, offering everything from long underwear to life jackets to Montana’s booming community of outdoorsmen and outdoorswomen (also outdoorskids and even outdoorsdogs.) From the time that 15-year-old Robert C. Ward found himself out of money and in need of a job here in 1900, Missoula has been a vital part of the Bob Wards story. In the words of Advertising Manager Karen Snow, “we appreciate local support and want everyone to know that we're out there in the community.”

It was in that spirit that the company agreed to sponsor Like a Lion: The Tanner Hall Story at last year’s BSDFF. The experience turned out even better than planned: “It was a great vibe in the Wilma,” Snow notes, “it was packed, the crowd was stoked.” With this stellar start, Bob Wards decided to come back for more at the 2012 festival.

Ordinary Skier represents another great fit for Bob Wards sponsorship -- the story of Seth Morrison, a kid from suburban Chicago who became a Colorado ski bum and eventually one of the pioneers and icons of freeskiing. Like Robert C. Ward himself, Morrison found a future in the Rockies, pursuing dreams that took him in unexpected directions. “This film is a slam-dunk for us,” Snow says. “I think this year will be similar to [2011]. These types of films really resonate.”

Ordinary Skier plays at the Wilma on Friday, February 24 at 5:30 pm.