Christopher Nagata on the Tradition and Transformation of Sushi

With a step-mother who was raised on traditional Japanese cuisine, I learned the joys of sushi relatively young for a kid in Montana. And when we really wanted the best, we'd make the three hour drive from Bozeman to Sushi Hana. I recently got to chat with Christopher Nagata, owner of Sushi Hana and sponsor of Jiro Dreams of Sushi, about his life as a sushi chef and the sacrifices he’s making to keep his business ecologically sound while going through as much as 400 pounds of rice and 100 pounds of fish a day. 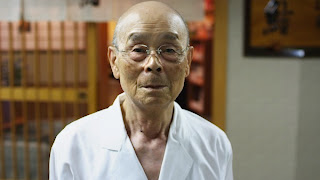 BSDFF: Can you give me a quick history of how sushi came about?

CHRISTOPHER D. NAGATA: You might find conflicting stories, but sushi happened because in the 17th century China introduced rice to Japan. Rice starts to ferment very quickly, and they figured out that if they covered the fresh fish they caught off the coast with fermented rice they could preserve it much longer. So at first rice was a preservative and then became a source of nutrition. It wasn't until the late 1800s that something like what we call modern sushi was seen. It kept evolving of course. What we consider sushi here in the states is much different.

BSDFF: How did you start rolling sushi?

CN: I've been a sushi chef for 25 years. I'm half Japanese, raised in Japan until I was 9, then moved to this country. My mom's American, my dad's Japanese. They moved back to the states to start restaurants in Northern California. I learned from sushi masters my dad had brought over from Japan. I learned from people that had learned the old way in the steps you would learn them. The fact is, you just can't do that the same way anymore. I grew up most of my life in restaurants. I went to high school and college thinking I would do anything other than restaurants, but all my life I find myself drawn back to it.

BSDFF: How is sushi here different from sushi in Japan?

CN: Just like any cuisine introduced from one country to another, the taste pallet and the combinations of foods and ingredients put in inherently changes. It happens with all kinds of cuisine. French food is going to be different in France than it is here, even in the best or most authentic sounding French restaurant.

In Japan, you're not going to see any of the varieties you would at my restaurant, for example. We have a whole section of house speciality Maki rolls, there are different ingredients including fish, poultry, vegetables, and we combine them in a particular way that isn't traditional.

BSDFF: And I'm sure what you can access in terms of the fish market here in Montana is much different than in Japan.

CN: Yeah, it is. But it's not necessarily the availability of things. If you're willing to spend the money you can get just about anything you want. But you have to consider how much you can charge, what people will pay for it. We keep it right for the people we cater to so we can turn our fish over every day. That way we don't have any leftovers and we're not throwing things away. And we're being as conscious as possible about where we're getting our food.

BSDFF: What do you do to be conscientious about where you're getting your fish?

CN: Mostly it's keeping up to date on what species of fish aren't thriving and choosing not to use them. For example: Tuna. The panoply of tuna is very different. The larger the tuna species, the more fat content it has; the smaller, the leaner. So Blue Fin are highly prized because it's a larger species and therefore has more flavor. Flavor comes from fat, and that's what a lot of people want. But, unfortunately, that species is overfished because of its popularity. Right now it's riding on the borderline of being threatened. They haven't put any regulations on it, but still that tells me I shouldn't use that fish. I choose to use a smaller species of tuna that reproduces quicker, reaches maturity quicker, and isn't threatened. The flavor is still great, and the look of it is magnificent.

People ask me all the time, "why don't you serve this fish or that fish" and they assume it's because I can't get ahold of it. But that's not true. I'm trying to do my best to use fish that aren't going to sacrifice the environment the way other fish would. But it's getting to the point where fish is in such demand all over the world that it's going to be hard for me to do this sort of business for a long, long time. I don't see it, for me, going on generations and generations.

BSDFF: I applaud you for watching out for the fish. So after we've seen Jiro Dreams of Sushi and we're craving a roll, what should we order when we come into Sushi Hana?

CN: What really sums up everything we've been talking about today is The Bodega Sunset. It mixes traditional ingredients and modern techniques in rolling and accompaniments like the wasabi sauce that comes with it.

BSDFF: Why was it important to you sponsor Jiro Dreams of Sushi?

CN: It was really a no-brainer for me because of my passion for sushi and food in general. I've been to Japan every other year to visit family. I know a little bit about this gentleman and I'm a humble admirer of his work, the tradition, and the lost art of sushi. Here in the US we have to do things a little different and I've had to change the things I learned as an apprentice in order to fit the demand of making sushi. Jiro has stuck to tradition, which requires apprenticeships, and teaching his son in the traditional manner. I really admire that. I admire his precision and the time he puts into it, and he's really keeping it an art form. I also feel like I'm an artist and food is one of my canvases.