When I began surfing at 13, I was just psyched to catch whitewater and get tumbled by Oahu’s mellow south shore waves. But as the years passed, surfing became a passion and addiction. Now, landlocked, I can only dream of the waves that are breaking without me. At this point, surf films are the only things getting me through. 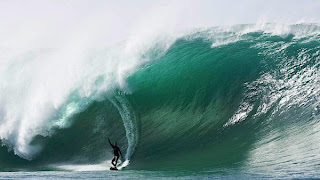 Luckily, this year Big Sky Documentary Film Festival is showing Riding Giants – a film about big wave surfing. Agi Orsi, the producer, will be screening a number of her films, including Dogtown and Z Boys and No Room for Rock Stars, on Saturday, February 25.

We sat down to gush about movies and waves.

BSDFF: So, what do you do as a producer?

Agi Orsi: As a documentary producer, which is different than a feature producer, I get the coffee. I get the financing. I choose the crew. A lot of times I have an idea and then I develop it and put it all together. Its fun being a producer because you can multi-task… it’s never boring.

BSDFF: You are known as one of the foremost producers of adventure films. What is it about these topics that interest you?

AO: Well, I like adventure; I am drawn to those kinds of sports. I like outdoor activities and in a way, it is kind of like producing. You start with a goal, and you don’t know what is going to happen. You might not reach that goal, but something else happens. At least that is the way that I came to Dogtown and Z Boys. Initially, I was talking to Vans about financing a snowboarding documentary that I had developed. But then I met Stacy Peralta [director and famous skateboarder] so I called Vans and ask them if they wanted to finance this film about Dogtown. I had done some adventure documentaries before that, but that was the film that got people to return my phone calls.

BSDFF: And it made such a huge splash at the Sundance Film Festival.

AO: We were surprised by that; we were just making the film. We didn’t know what would happen.

BSDFF: So what have you been up to since then?

AO: I just finished No Room for Rock Stars, which is all about the Vans Warped Tour. It started when Vans marketing approached me and asked if I was busy. And you’re supposed to always be busy. So I said “Sure, I’m busy. But what do you have in mind?” And they asked if I wanted to produce the Vans Warped Tour documentary. It will play here, and then we are opening it on Thursday night, March 1, in 50 theaters across the country.

BSDFF: So what is your next project?

AO: Well, now I am starting a documentary on Eddie Aikau. You must know who he is, being from Hawaii…

BSDFF: Wow, Eddie Aikau! Yes. [Note: Eddie Aikau was a famous big-wave surfer, waterman and island-hero from Hawaii] When is it coming out? I’d like to see it.

AO: I think it should be done around July. We are doing the editing right now. There is a lot of footage, a lot to work with. We are doing the story about Eddie’s life, so we interviewed his family members. They were totally cooperative - they gave us a lot of archival film and photographs. We also interviewed professional surfers like Shaun Tomson and Jeff Hakman; we’ve got a lot of good people. I think it will be a great film.

BSDFF: It seems like with documentary films, there are so many different threads of stories that you can follow. How do you decide which story you want to tell?

AO: You need to be familiar with the subject before hand. The interesting thing about documentary is that you really don’t know what is going to be said. You might think you know the story, but then someone you are interviewing could come up with something new that you want to follow.

BSDFF: That’s got to be an exciting process, right? Because you don’t really know what will come out of it.

BSDFF: So what do you think is the role of film festivals in documentary film?

AO: I think they are more and more important. Documentaries aren’t getting the theatrical release because the market has changed. We don’t have the DVD release that we used to have: where the theater release was really marketing for the DVD. I think that the way to have any revenue now is with iTunes. Because theatrical release is so expensive, festivals are the way to get out there, a way to get your film known and liked. Festivals are more and more important, and it seems like there are more festivals.

BSDFF: One last question, I read that you are a snowboarder… would you like to go snowboarding on Sunday?

AO: I fly out on Sunday, but maybe I could change my flight… I would love to.