Working Together to Promote Culture in Missoula 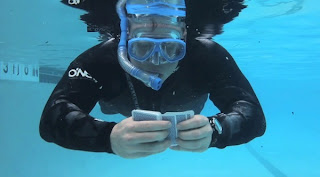 Fact & Fiction—a Missoula independent local bookstore—celebrated their 25th anniversary last year. They’ve been happy to be a part of the Missoula literary community for a quarter of a century. This year Fact & Fiction is sponsoring the film Ben Franklin Blowing Bubbles at a Sword: The Journeys of a Mental Athlete, directed by Jonathan Napolitano, about athletes training and competing in the 2011 USA Memory Championship. Ben Franklin will play with Tramping in Bohemia on Monday, Feb. 20 at 2:00 pm in the Crystal. Big Sky sat down with Eamon Fahey of Fact & Fiction to discuss the bookstore's involvement in this year's festival, what's exciting in literature today, and quiz him about US history.

BSDFF: How’d you first hear about the film, and why did this particular film interest Fact & Fiction?

EAMON FAHEY: The film was offered up to us as a possible sponsorship by Ingrid at the BSDFF—and there’s a good tie-in with a book called “Moonwalking with Einstein” by Joshua Foer, so that was sort of the hook for us, tying the film in with some good literature. We’ve talked with Penguin Publishing and they’re releasing it to us a week early so we can share the book with the film goers.

EF: This has been the second year we’ve sponsored the BSDFF, and it’s one of our great cultural events in Missoula, and—being downtown for the most part—it's a great time for Fact & Fiction. We also see ourselves as a promoter of cultural things in Missoula, so it’s a good fit for us.

BSDFF: Who was the 23rd president of the United States of America?

EF: Wow. I’m going to guess: Garfield? [Ed: for inquiring minds, the 23rd president of the USA was Benjamin Harrison; James A. Garfield was the 20th.]

BSDFF: Over the years, Fact & Fiction has played a crucial role in the local community of Missoula, so how have you seen Missoula change over the years with film festivals like this, and what do you think we can look forward to in the coming years?

EF: I think further cultural events like the BSDFF are so crucial to who we are, and its one of the things that makes the city unique. So, I suspect and hope that things like the BSDFF continue to grow—continuing to be a part of who we are.

BSDFF: If there was a documentary about Fact and Fiction what would be the weirdest or most interesting thing viewers would see?

EF: This is interesting: Barbara—the original owner of Fact & Fiction—first worked at the University Bookstore, starting there, and then went on her own and began Fact & Fiction and, four years ago, she put Fact & Fiction up for sale. The UM bookstore—also independent—purchased Fact & Fiction and kept Barbara on board. She’s sort of come full circle.

BSDFF: What’s one book you’re raving about this month?

EF: I’m going to give you two: “Quiet” by Susan Gain just came out a couple weeks ago. It’s about introverts, and the view of the world from an introvert’s perspective. The subtitle is something like: “introverts and how the world shuts them up.” It was eye-opening for me—I guess I’m an introvert—so I got a lot of value from it. The second book is by Julian Barnes and came out this Fall, winning the Man Booker: “The Sense of An Ending.” It’s a small novel and was so intriguing. It’s about memory too—the memory of experiences.

BSDFF: By sponsoring a documentary, do you feel like you’re backstabbing books?

EF: No, not at all. We’re all in this together in terms of culture, so in no way do we think we’re in competition with films. We’ve got to work together to promote good stuff like this, good culture.

Ben Franklin Blowing Bubbles at a Sword: The Journeys of a Mental Athlete plays Monday, February 20 at 2:00 pm with Tramping In Bohemi.