Baring It All is a film that speaks to the heart of what Missoula's Advanced Imaging Services is all about - helping patients beat breast cancer not merely in order to survive, but to thrive and live a whole life. For many women, the disease is not merely illness -- it changes the way they look at themselves and the way the world looks at them. 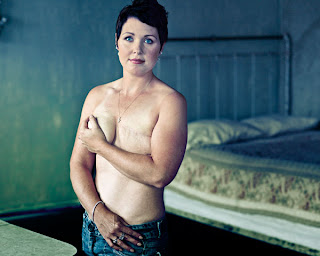 In Baring It All, survivors take back their self-image in a series of bold and challenging photo shoots with fashion photographer David Jay. Jay founded The SCAR project to create images of women under forty who have been diagnosed with breast cancer, fighting the perception that it is a cancer of the elderly, an “old ladies’ disease.” In fact, 10,000 women under the age of forty are diagnosed with breast cancer per year.

Michelle Weaver-Knowles of Advanced Imaging was one of those women. She also lost her sister to breast cancer in her thirties. She now works with Advanced Imaging because, as she says, “it’s a passion. People don’t realize that by helping them, it’s helping me.”

Cathy Palmer also found her family touched by the disease - in her mother’s family of seven girls, five would eventually be diagnosed with breast cancer. “You develop a rapport with the patient,” at Advanced Imaging, and that rapport helps drive the work she does.

Both women describe the healing process as one of discovering strength through adversity, and to them that is the heart of what Baring It All means to them. “In the film, you can see it in their eyes,” Michelle tells me. “... when she’s posing, even though she’s bald, you can just see the beauty in her eyes.” Cathy adds, “It’s very raw, there’s nudity, but it’s tastefully done. It’s emotional.”

In addition to sponsoring the film, Advanced Imaging will be providing information on breast cancer screening and self-examination at the event. Their twenty-strong support group plans to attend, but Cathy hopes that the biggest impact will be on women who have not yet considered the possibility of breast cancer in their own lives. “Women need to learn to take care of themselves,” she says, “and pay attention to what’s going on in their own bodies.”

Baring It All screens at the Wilma at 3:30 pm on Saturday, February 25, as part of the Art Docs shorts series.