“Visionary Insight: Behind the Scenes of the Film ‘Winter in the Blood’” is the story behind a larger story. It’s a film that takes a look at the people who helped bring to life the adaption of one of the greatest novels ever written by an American Indian about American Indians. 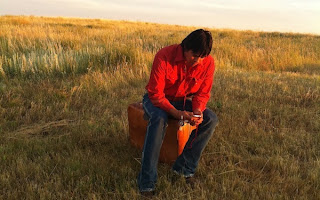 The 37-minute “Visionary” documentary provides a space for the filmmakers – no matter how small or large their role – to express thoughts about being on set for the adaptation of Blackfeet author James Welch’s Winter in the Blood, a book award-winning author, poet and playwright Sherman Alexie describes as “thee” novel of Native American literature.

“It’s the first real shot of Native American realism, naturalism, that was based on everyday life, not mythology,” says Alexie onscreen. “It’s the first novel I read where I completely identified with the main character. I read it when I was 19 and I thought, ‘I’m Virgil. I’m Virgil.’ So, now to see Virgil walking around the streets of Montana… I started crying when I got here. This is so important.”

Here’s the IMBD plot summary: It begins when First Raise’s wife leaves him. “Virgil sets out to find her -- beginning a hi-line odyssey of inebriated encounters, sexual skirmishes, and improbable cloak-and-dagger intrigues with the mysterious 'Airplane Man.' Virgil's quest also brings him face-to-face with childhood memories and visions of his beloved, lost brother Mose -- some glorious, some tragic. Only when Virgil seeks the counsel of an old, blind man named Yellow Calf, does he grasp the truth of his origins and begin to thaw the ice in his veins.”

The making of “Winter in the Blood” brought some American Indian luminaries in film and literature and a fresh-faced cast of nine Longhouse Media interns to Montana, all of which was captured by “Visionary Insight” directors Tracy Rector and Lou Karsen.

Longhouse Media interns arrived in Montana to provide film support to “Winter in the Blood” directors Alex and Andrew Smith. In addition, the interns had the chance to meet and work with renowned author Alexie, and the movie stars Gary Farmer of Powwow Highway fame and Spencer, whose mother is from the Fort Peck Reservation on the Montana Hi-line.

“Visionary” does more than explore the making of a film, but it also captures the splendor of the plains with luminous landscapes and great big skies. “I was so impressed with the work Tracy and Lou had done of the film, having been there, I wasn’t aware of the amount of footage that had been taken,” said UM Media Arts major and intern Travis Coleman. “I was really impressed with how they put it all together.”

Most of the “Winter” interns arrived in north central Montana near Havre the summer of 2011 with a background in film, whether it was through Longhouse Media programs or a university, said Rector, executive director of Longhouse Media. Rector’s Seattle based indigenous media arts company has worked with more than 2,000 students around the country.

Rector said the students had a great professional role model in Spencer. “All of the interns felt really respected by him and were interested in learning from him. That was an absolute highlight for interns to work with him.”

“Confidence is built through experience,” she said. “Having the chance for a hands-on work opportunity on a set and the cultural exchange, brought out the strengths and knowledge of these interns.”

The interns discovered the beauty of the Montana Hi-Line, the region’s people, and learned what it was like to work 16-hour days on a film set blasted by High Plains heat. “It’s so cool to see young Native people working and achieving their goals and they’re learning fast!” said Spencer.

Intern Dallas Pinkham spent about three weeks working with Longhouse Media during the filming of “Winter.” He left with a heightened sense of what he can do with a camera and a good story. It’s likely film will play big role in his life.

“I’d love to become a movie director and hopefully have my own production studio… I hope I can share my stories through media.”

"Visionary Insight: Behind the Scenes of the Film 'Winter in the Blood'" screens Saturday, February 25 at 5:15 pm in Wilma 1.