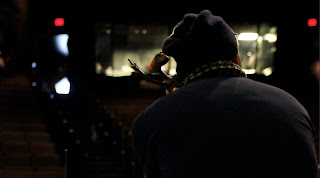 Dave King is a busy guy. The co-founder of at least 10+ jazz bands of international repute, he’s also the father of two and a cult figure in jazz music, especially where he lives in Minneapolis. Over two days in the spring of 2010, King, one of the greatest improvisational jazz drummers of his time, performed at the Walker Art Museum in Minneapolis, Minnesota.

This is Hutton’s second time at Big Sky. His documentary, Crude Independence, about the oil fields in North Dakota, screened here in 2009. We hope it’s not the last time he’ll visit. He just pitched a new project, Bluebrain, at the Doc Shop this year.

Big Sky Documentary Film Festival: How did you get the idea for this project?

Noah Hutton: I’ve been a fan of the Bad Plus, Dave King’s primary band, since I was 15. They’ve been my number one band. I grew up listening and playing jazz all through high school, and then I started doing film work when I graduated, and I thought to get in touch with their manager to see if I could do work with them. Then I saw that there was a two-day festival in the spring of 2010 in Minneapolis. I flew out there, hired a local cinematographer, and made the film at the Walker Art Museum. I had a pretty dynamic subject and I was hoping to get to know him a little bit more, to get access, and see his life outside of music. I was thrilled to find myself going to see his family and spending time with him.

BDSFF: You mentioned that you’re a musician yourself. What do you play?

NH: I play the drums, I’ve been a jazz drummer since high school and have studied with teachers and played with trios. I spent four years of jazz orchestra in college. I still play with a band in New York. I now do all of the music for my features and I score them all.

BDSFF: How does making a music documentary differ?

NH: Crude Independence is a pretty observational film. The point was to let the people in the town tell the story for themselves. The music in the film was my voice. I could make a mood through the music with a much lighter touch than my own narration.

So in this concert film, I knew that all the images would be set to Dave’s music. It was kind of like making an hour-long music video. The tone of it was really Dave’s film. It moves between high-energy jazz groove and more contemplative music. The piano music and some of the slower songs definitely have a mid-west soul to them. The challenge for me was how to capture what would fit with the soul of that music.

BSDFF: You really give the impression of Dave as an amazing artist, yet he seems reluctant to be the center. How did you find the balance?

NF: The event was called King for Two Days, but the lesson was that no one was king for two days and that the concert was held above the needs of the individual. But that’s what’s always attracted me to Dave King’s bands. They’re not about the traditional jazz thing, where one star player takes a solo and then kind of hangs back. All of the groups he’s in, he’s interested in what’s a new thing that can happen, an accent for life. I love that. I think it’s such a great principle for collaboration, and I love working with other people in the work that I do. I think that’s the lesson in the end. I hope that would be the appeal, for people who don’t know his music, but who are in collaborative acts. [The members of his bands] are all super talented musicians and leading improvisers and none of them are doing the sideshow acts to make big bucks, and they’re all dedicated to the art of these bands. Dave uses humor to cut through egos. He’s really talented at taking a potentially charged question or situation and just using the power of a joke, just to level everything and start from a place of what’s the best idea for this situation.

BSDFF: What will you take of this experience, and your collaboration goals, into your next project?

NF: By making this film I got involved in another project with The Bad Plus happening this spring. The band was commissioned by Lincoln Center and Duke to do an interpretation of Stravinsky’s The Rite of Spring. It premiered last spring and is going on tour this spring. Because The Rite of Spring was originally performed in Paris with ballet, visual image was a huge part of it, and the band asked me to do the visual and lighting design. I’ll be touring with them to six cities in Ireland, one in Norway, and a few dates in the US, ending up at Lincoln Center’s outdoor music festival in the summer.