Heaven on Wheels: "The Bus" Plays Thursday at Big Sky 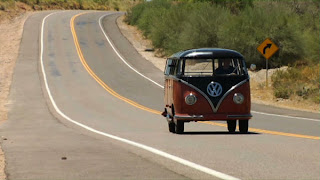 These are but a few nouns and adjectives used to describe the iconic Volkswagen bus. So, what is anyone waiting for? Get on The Bus, people! It's here, and Big Sky Documentary Film Festival participants can be the first to view this film by Damon Ristau, former director of the BSDFF.

The documentary films previews Thursday, Feb. 23 at 7:30 p.m. in the Wilma 1 Theatre. Ristau draws on an incredible archive of film clips to tell the story about a vehicle that not only invokes thoughts of freedom but inspires people to put their arms around them, throw some clothes in the car, maybe a few kids, and hit the road. Some of Ristau’s first memories of the VW bus go back to when he was around kindergarten age. His parents had a pop-up camper bus. He remembers being up in the camper and staring down at the sink. This is the life, he thought. I like this. He now owns two VW buses. His own admiration of the vehicle inspired him to make a film about it. He started researching in 2010 and had enough material to make a five minute clip and a presentation during the 2011 BSDFF pitch session.

“It went over pretty well,” said Ristau. “The Documentary Channel happened to be on the panel and they expressed interest in the project. They came on as executive producers.”

Yet, he still needed to raise money. He turned to Kickstarter, a crowdsource fundraising site where he drew upon an instant fan base. Strangers from around the world helped him raise nearly $25,000 in 30 days. Volkswagen bus owners prove again and again a deep commitment and love for their bus. Just how much would anyone pay for a Volkswagen bus? The film reveals a car auction scene where two men try to outbid each other for a green-and white-colored restored Volkswagen bus. In their bidding frenzy, the I-want-it-I-want-it bidders drive up the auction price to nearly $200,000.

The zealous bidders might have made lyricist Peter Townsend blush when singing these classic words from The Who’s chartbuster, “Magic Bus”:

I don’t want to cause no fuss (Too much, Magic Bus).

But can I buy your Magic Bus? (Too much, Magic Bus).

I don’t care how much I pay (Too much, Magic Bus).

I wanna drive my bus to my baby each day (Too much, Magic Bus).

The Bus is filled with many memorable bus clips, facts and figures. Who would have guessed the cultural icon so associated with American hippies actually has connections with Germany’s Hitler? But the filmmaker also effectively relies on bus owners' nostalgia to evoke memories of good times - memories that cause some storytellers to drop a few healthy tears.

Even though the film is still considered a work-in-progress, a number of bus fans can’t wait to see the Thursday preview. On Facebook, Northwesty gives the film a thumb- up on the The Bus Movie page: “Looks like we may have a caravan of VWs heading over from the Seattle area on Weds the 22nd!”

The Bus plays Thursday, February 23 @ 7:30 pm in Wilma 1. For more information about The Bus, visit: https://www.facebook.com/BusMovie. To watch a trailer, visit http://www.busmovie.com/.