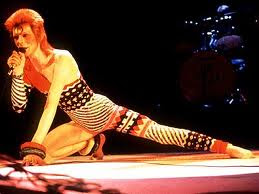 Nobody does it better and no, I’m not talking about Carly Simon. No musical artist yet has eclipsed David Bowie in genius style, showmanship, and complete world fascination. One glimpse of his costumes, that hair, those legs, and men, women, and children of every nation swoon. Out of fifteen plus addictive albums, The Rise and Fall of Ziggy Stardust and the Spiders from Mars (1972) remains memorable for Bowie’s groundbreaking use of his androgynous alien persona, Ziggy Stardust.

His clothes and colors are fantastically retro, yet the excellence of his musical tracks endure four decades later. The ultimate concept album, The Rise and Fall of Ziggy Stardust inspires pity for a younger generation fed hit singles and empty promotion. The album’s popularity and Bowie’s resulting fame drew a cult following as resistant to Bowie’s many future musical evolutions as folkies were to Dylan’s plugging in. In fact, the same documentarian who captured Dylan’s swagger in Don’t Look Back (1967) also captured the final concert of David Bowie performing as Ziggy Stardust in London in 1973.

This awesome rock time capsule, Ziggy Stardust and the Spiders from Mars (1973) screens Saturday night at the Wilma and is sponsored by Carlo’s One Night Stand, the vintage and costume specialty store on Missoula’s Hip Strip. Come dressed as Ziggy Stardust or another Bowie-era character and receive half price admission to the show!

Max Gilliam, Carlo’s owner, says his store has everything you could possibly need to outfit yourself as the andro-enigma, including tights, sequins and makeup.

“What I do at Carlo’s is try to have costumes and vintage that’s very representative of the periods. I work hard at that all the time and make it affordable.”

Mr. Gilliam came to Missoula from Santa Barbara in 1977. The G.I. Bill gave him $411 a month and he used to bike around town and stop at rummage sales, finding fabulous pieces for just a quarter. When his stock piled up, Mr. Gilliam would put on his own sales to cover rent and food. Since that time, Carlo’s One Night Stand has had three locations: at the UM, 6th and Higgins and now at 109 South 3rd, right next to the Higgins Street Bridge. Mr. Gilliam says his favorite Bowie tune is "Space Oddity," and he enjoys all types of music except country. “I don’t drink, I’ve already been divorced, and my truck works,” he says in his defense. We hope to see him in some serious vintage of his own this Saturday 2/25 when Ziggy Stardust and the Spiders from Mars screens at 9:30 in Wilma 1. Don’t forget to dress as Bowie to receive half price admission!