In the Reality Box with Caveh Zahedi 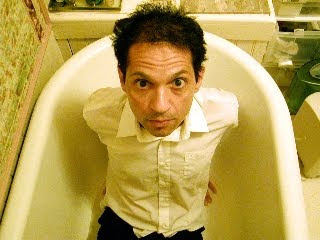 I first encountered Caveh Zahedi when I was sixteen and very stoned. My friends and I were watching Waking Life, an animated Richard Linklater movie beloved by potheads and philosophers alike, and on-screen, a cartoonized version of Zahedi was drawing film frames in the air and talking about “holy moments.” His cartoon eyes were bugging out. Sparks were leaping from his fingers. My reaction was one of: shit, man.

Nine years later, watching Caveh Zahedi’s most recent non-fiction film, I Am a Sex Addict, screening tonight at the Crystal at 7:15 pm, I added an exclamation point: shit, man!

It is impossible to remain unresponsive to Zahedi’s work – his films are open-eyed funny, tangential, lascivious, bizarrely pretty, and honest to the point of untruth. After studying philosophy at Yale, he moved to France, where he failed to charm Jean-Luc Godard and was consistently shot-down in his attempts to convince French television and the French government to fund his work. Tenacious, he moved back to LA to attend UCLA film school, where he co-directed the film A Little Stiff, which (finally!) premiered in competition at the Sundance Film Festival. Since then, his films have won wide critical acclaim, and they have also been, to quote his website, “virulently panned.” When his films have lacked in critical adoration, however, they’ve made up for it in cult followings, and BSDFF is proud to be counted among the Zahedi adherents.

Mr. Zahedi was kind enough to answer a few questions for us.

BSDFF: Your films are not the typical “documentary” fare, and I wonder how you view your own work under this umbrella term: do you feel you are seeking to “document” something?

Caveh Zahedi: I do feel that I am seeking to "document" something but that "something" is perhaps different than the "something" that traditional documentarians seeks to "document."

BSDFF: Since you are often the subject of your films, would you say you’re attempting to document yourself?

CZ: Absolutely. Myself and the Reality around me, with a capital R.

BSDFF: And how does documentation differ from storytelling?

BSDFF: Do you feel more honest with a camera on you? Does film-honesty feel different from everyday honesty?

CZ: It's definitely an odd and often surreal experience. I remember a gentleman in his eighties pulling me aside and asking me in hushed tones which countries' prostitutes gave the best blow jobs, as if he were about to head for the nearest travel agency and buy a one-way ticket to whatever country I had recommended. But the most memorable reactions are from sex addicts and sex workers who come up to me afterwards and reveal the most intimate details of their sex lives. It's actually a pretty wonderful experience and it always feels like an honor and a privilege.

BSDFF: In many ways, you are very exposed in I Am a Sex Addict. However, I couldn’t help but notice the proliferation of naked women in contrast to your mostly-clothed body. Was there a reason behind your comparative modesty?

CZ: The main reason for my comparative modesty was that I needed to hide the fact that I didn't in fact have an erection during most of the scenes in which I was supposed to.

BSDFF: I wonder, too, about a point in the film where you refer to yourself as having been a feminist – does feminism still play a part in your filmmaking process? What does your feminist side think about having so many lovely breasts onscreen?

CZ: I do still think of myself as a feminist but not the dogmatic variety. There are so many different schools of feminism that the word has became very vague indeed. One problem I had with casting during the film was from feminists who felt that the script was too shame-based and not sex-positive enough. That type of feminism is all about breasts being exposed. In other words, my feminist side has no problems with it.

We will be screening four of Caveh Zahedi’s movies over the next two days: I Am a Sex Addict screens Friday, February 24 at 7:15 pm. I Don’t Hate Las Vegas Anymore, In the Bathtub of the World, and his newest untitled film will screen Saturday, February 25 at 3:00 pm, 5:00 pm, and 7:15 pm, respectively. All films screen at the Crystal Theater.