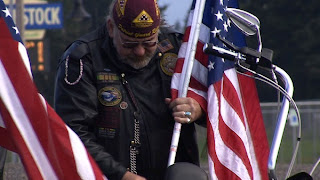 In Patriot Guard Riders, filmmaker Ellen Frick takes us alongside the Patriot Guard Riders (PGR), a club of leather clad vets on motorcycles, as they roll down small town American streets, flags streaming. We watch as they line up in front of members of the Westboro Baptist Church and drown out lyrics like, “No toes left for their toe tags” in a thunder of revving engines. Frick uses this clash to look at the legacy of American wars. We talked about the PGR and what it was like strapping on leathers and rolling with the gang.

BSDFF– How long have you been making documentaries and how'd you get into it?

ELLEN FRICK– I've been working on documentaries only about 10 or 11 years. I had another career before that of civil engineering. I actually got sick, I got breast cancer and did that sort of cliche of, “oh is this what I want to do with my life?” I was really working with clients to circumvent environmental regulations because that's what the people who paid the bills wanted. I decided I wanted to write non-fiction. Then I came to making documentaries instead of writing.

BSDFF– That's really admirable. I saw that your production company, Wall Fly Films, is devoted to social issues. Why was this an important directive for you?

EF–For me, the only thing that matters in terms of putting all this work and money in is to tackle some of the issues of today and inspire people to think about things they haven't thought about before. In this case it's military funerals.

BSDFF– How did you settle on the PGR?

EF– I read about the Westboro Baptist Church, the "I hate fags" groups, coming to the military funerals because, as they said in their Supreme Court argument, that was the highest pulpit in the land. I heard about the bikers going too and started looking into it and of course the story got much deeper than that when I learned about who the bikers are and why they're there.

You know I actually just called them up and asked if I could come on a "mission." I went by myself without any crew or camera. I just rode on the back of somebody's bike and was part of the flag line to see what that felt like.

BSDFF - In the movie we see the Patriot Guard Riders going on several "missions," both to be on hand at funerals but also to honor returning soldiers. What do you feel is the most important action that they take?

EF– You've heard the quote, "from the greatest evil comes the greatest good" and I'm most impressed that after this war ends they're going to carry on honoring veterans. There's nobody who has been going to veterans' funerals all this time. Especially the homeless vets. It touches my heart that somebody is paying attention, even if it's these weird guys, these leather clad bikers. We have plenty of homeless Iraq and Afghanistan vets and somebody is paying attention.

BSDFF– A lot of people come back from the war and feel lost. We need to be doing more to be taking care of the people who go through war for our country.

EF– And doing it in this informal, noninstituitional sort of way really struck me.

BSDFF– It seems hard for anyone to identify with the Westboro Baptist Church, but is there any part of their message worth paying attention to?

EF– Honestly, no. I think of them as an "I told you so Ministry." Even if people believed what they said about the Bible, it's too late. Only one family is going to get into the gates of heaven and it's their family. Thank goodness people can't join their church.

BSDFF– What do you hope people take away from the film?

EF– A new understanding of war. That these statistics in the paper are real people, with real families. Getting people to go to military funerals is my first goal. Hey, maybe we wouldn't have war if everybody could see what this is like. I know that's altruistic, and, of course, it's not altogether true. There's plenty of Generals going to military funerals. But if the general public experienced what I've experienced the last couple of years just standing there at a nineteen year old kid's funeral in the high school they graduated from the year before… Some kids go back to their high school to say to hi their teachers, but not when they're dead.