We Lost It at the Movies 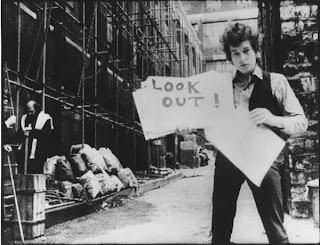 Over the course of two days and five movies, (six if you include American Juggalo, which you should), I became convinced that loss is the great documentary theme. It may have simply been my choice of films, but it seemed to come up a lot. In Battle for Brooklyn, the titular battle is lost by local residents after years of protest against the imposition of eminent domain, and won by a monstrous new basketball arena. In Don’t Look Back, Bob Dylan’s fans, Joan Baez, and Bob himself all seem to be mourning the end of the idealistic phase of the Dylan legend over the course of a tour of England. In Better Than Something, the extraordinarily volatile performances and story-telling of the musician Jay Reatard only reinforce the sad fact that he died way, way too young. In 1991: The Year That Punk Broke, the capering antics of Sonic Youth and Nirvana on tour in Europe remind us how old we’ve gotten in such a short time. The exception to this rule was the Adventures in Plymptoons program on Sunday night, which was so delightful (and delightfully hosted by Mr. Plympton himself), that I’ll keep quiet about the fact that his films aren’t really documentaries.

This palpable sense of loss has to do with the fact that documentary films, like photographs, inevitably remind us that what has been captured within them has already passed. This point has been made before, but it came across with incredible potency in the films I watched. There’s the heartbreaking scene in Don’t Look Back in which Baez sings a beautiful rendition of Dylan’s own “Percy’s Song” while he sits typing loudly with his back to her. When she disappears halfway through the movie like the Fool in King Lear, Dylan, like Lear, just gets crazier. Something important has been lost. When he bests Donovan in their famous hotel-room confrontation, he does it with a smug version of “It’s All Over Now, Baby Blue,” telling Donovan, and the audience, to take a hike. There’s a moment late in the film where we see him starting into “The Times They Are A’Changin’” for what must have been the millionth time, and his exhaustion and indifference to the song is painful to watch.

And yet Dylan is still with us. In Better Than Something, the toughest scene is saved for close to the end, when we meet Jay’s beloved sister, who looks to be about thirteen. She proudly shows off her bedroom, decorated with her dead older brother’s concert posters, and takes out his favorite guitar for the camera. It’s almost unbearable when she says, without a hint of self-pity, that she “got to pick out his coffin” and imagines he’d be happy that he got to be buried next to Isaac Hayes. In another scene, one of Jay’s friends shakes his head and explains how “disappointed Jay would have been with himself” for “overdoing it” on the night of his death. (He died of a combination of cocaine and alcohol, a fact that is somewhat oddly never stated outright in the film.)

Kurt Cobain’s self-destruction is much better known than Jay Reatard’s, and the glory and sadness of 1991 is the fact that it is so completely a portrait of a moment before things went to hell. Filmed the month before Nevermind came out and turned Nirvana into the biggest band in the world, it captures the goofier, much less chronicled side of Cobain, as well as that of the professionally dour members of Sonic Youth. Sure Kurt is still somewhat worrisomely masochistic—the shot of him smashing his head into an amplifier plays on the BSDFF promo reel before every movie at the festival, and is thus seared forever into my brain—but his flailing comes across as “punk rock” rather than pathological at this stage in the game. The recent news that Kim Gordon and Thurston Moore, the married couple at the heart of Sonic Youth, are getting divorced only makes the film more poignant. In scene after scene, Thurston mugs for the camera with a portable microphone, declaiming nonsense like a caffeine-addled teenager while Kim watches bemusedly behind sunglasses, or, in deadpan retort, crunches decisively into an apple.

The rock movies are so full of life that you can forget the sad circumstances that surround them, but that isn’t quite true of Battle for Brooklyn. As the film follows Daniel Goldstein, the lone holdout in an apartment building that stands in the path of demolition, we see his evolution as an activist and as a person over the course of almost a decade. He loses a fiancée and his fight against the city, but he gains a wife and baby daughter and a newfound sense of purpose. The loss is real, though. I had tears in my eyes as I watched the footage of Bloomberg and a team of politicians and developers “breaking ground” on the new basketball arena site. It sure looked like they were digging a grave.