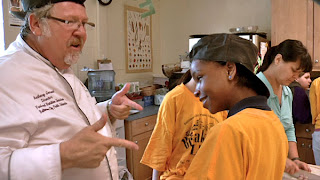 “Geraci is an inspiration. He proves that when you get students growing, cooking and eating healthy food, it’s not children’s lunches that changes – it’s children’s lives.” – Curt Ellis, Foodcorps executive and producer of King Corn.

Guess who’s in town? Well, a lot of folks are in Missoula and a good number of them will be lining up, buying tickets and claiming a theater seat to watch Cafeteria Man, a film about getting healthy food to school children.

The public can view the film by Richard Chisolm on Thursday at 4:45 p.m. at the Wilma 1. The director will be in attendance.

The film’s starring protagonist, Tony Geraci, is also scheduled to arrive in Missoula and is set to talk with high school students from across Missoula about good food. He’s gaining national attention as the food service director for the Baltimore school district where’s he’s working to give 83,000 kids fresh food in exchange for stale, pre-plated processed meals.

Guess who in Missoula helped bring Geraci and also sponsored the film Cafeteria Man, to be part of the Big Sky Documentary Film Festival? Well, let’s preface this question by asking who in Missoula cares about good food? A number of folks might fit the bill, but the correct answer for today’s question is Garden City Harvest, a local non-profit that provides local, sustainably grown produce to those in need. The group aims to revive the regional tradition of producing food locally.

When GCH employees learned they could help bring Cafeteria Man to Missoula as part of the BSDFF, they jumped at the opportunity, said Jean Zosel, executive director of Garden City Harvest.

And then Garden City Harvest learned of the BSDFF. Zosel said they look forward to matching the film and Geraci with students. Here are a few facts from the Cafeteria Man website:

- One of three children born in the United States in the year 2000 will develop diabetes at some point in their life.

- One third of children and adolescents in the United States are overweight or obese.

- The National School Lunch Program serves approximately 30.5 million lunches per day at a cost of $8.7 billion a year.